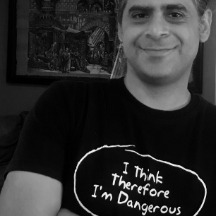 Johannesburg based health and nutrition coach Sameer Dossani. He also wrote "Why Modernity Makes Us Sick and How Ancestral Living Can Heal," for the Nov 4 - Nov 17, 2020 issue of Port of Harlem.

George Monbiot is a British writer known for his environmental and political activism. Sameer Dossani is a low carb Health Coach and PhD student in Anthropology at the University of the Western Cape in South Africa. Dossani, , refutes Monbiot’s argument on how humans should interact with the rest of thev world as fitting squarely within the colonial world view.


When Kruger National Park was first declared a wildlife refuge more than 100 years ago, European settlers in South Africa decided that the land should be free of humans. For visitors to Kruger today it may be difficult to imagine, but the beloved national park, home to elephants and lions, was once also home to thousands of people. The process of separating these people from their land took decades.

Removing people from “natural land” is something European elites have done all over the world including in Europe itself. The appropriation of common land from the people who occupied those lands is a core tenet of colonial capitalism.

But kicking people off their land is clearly theft. How can it be understood to be otherwise? Well, if there were no people living on it in the first place, was it really theft? There is a whole strain of colonial literature that talks about vast open spaces, about “manifest destiny”, of the beauty of conquering an empty natural land in order to civilise it.

Sometimes writers are honest enough to admit that the land wasn’t really empty - it was full of Palestinian or Kikuyu or Khoisan or Diné people, but more often these are stories of a promised “land without people for a people without land.”

With or without people, the colonial mission was to civilise the land, to tame it, to conquer it. But the decedents of those who committed this act of purification should never forget the magnitude of what was achieved when humans finally won their battle over nature. Some places should therefore remain untouched both as a reminder of what the early Europeans had had to contend with and for activities such as hunting and fishing. For these purposes, colonising Europeans saw value in protecting “nature”.

We now know that many of the spaces we think of as “nature” have actually been moulded by humans. The Amazon rainforest would not exist in its current form without the work of humans; the native peoples of Australia were cultivating food crops in spaces that Europeans thought of as wild centuries ago. Without the Australian Aboriginal agriculturists, huge parts of Australia became desert within a generation.

These examples and others like them raise a startling set of questions: What if humans are not distinct from nature? What if most humans for most of human history have actually been part of nature? What if “nature” is something that is actually built and maintained by humans, at least in some places and at some times?

If I were to ask these questions to the Khoisan people I’ve had the privilege to meet in the Northwest of South Africa, they would look at me funny. This community still maintains a worldview built around the power of the natural world. Humans, to them, are a small piece of a much larger puzzle, one that we can never fully comprehend.

My notes from my most recent visit to their community include me asking the question, “How are humans distinct from nature?” The response was as follows: “If we’re not part of nature, what do you think we are?”

I have no answer to that question, but George Monbiot apparently does. In his latest book and in his latest piece for The Guardian he argues that humans can and should be separate from nature, that we should grow food in laboratories and leave “the wild” to itself.

The work is shockingly amateurish for a journalist of Monbiot’s calibre. For example it uses one academic paper from the mid 1990s to back up sweeping claims about the environmental damage of raising ruminant animals, ignoring studies on the subject that have been done more recently. Others have given the counter-view, including this point by point rebuttal from Diana Rodgers of Sustainable Dish.

What bothers me the most about Monbiot’s argument is that it fits squarely within the colonial world view. There is civilisation, with all of its wonders and achievements (including lab-grown meat, apparently) and then there is “nature”. Nature is a place without humans. When humans impinge on nature, they necessarily cause harm, even when they are doing their best to raise human food within natural ecosystems. But the solution to that problem is not to imagine that humans can be separated from natural systems. The argument has roots even deeper than the European conquest of Africa. It goes back to the garden of Eden. Christians believe that there was once paradise which excluded all humans except the first two - Adam and Eve. In order for humans to populate the world, they had to sin. Some Christian sects - the vegetarian Seventh Day Adventists among them - believe that Eden can be rebuilt through a reconciliation. For Monbiot, the reconciliation seems to mean restoring the natural paradise by removing the “sinful” humans.

In scientific terms, there is no such thing as “nature”. There are atoms which make up molecules which make up organisms, many of which can manipulate their environment. It is absolutely true that humans have taken this to extremes that threaten to destroy not just the lives of many individual humans but potentially the human species itself (and many other species, some of which are already being driven to extinction by human activity).

But the solution to that problem is not to imagine that humans can be separated from natural systems. Such imagining - like the lab meat silliness - requires a huge leap of faith that the changes humans make to the environment and to themselves will not backfire. It requires assuming that Eurocentric science and technology can fix a problem that Eurocentric science and technology created. Is there a more brazen form of hubris imaginable? In some places this is already happening . . . North American tribes reintroducing bison . . . to help restore the ecosystems that European colonists destroyed centuries ago. There is another way to solve our problems. Humans, like all other creatures, evolved as part of ecosystems. To the extent that we are destroying the planet, we are doing so through destroying its ecosystems. If we can find ways to locate our food system within ecosystems (and not in opposition to ecosystems) we might just have a chance at surviving the century. We might even be able to sequester enough carbon in a timely enough way to avoid the most horrific of the climate change predictions.

This means learning not from Monbiot and his colonising ilk, but from the native peoples of Africa, Asia and the Americas who were living along side nature for millennia before Europeans sought to conquer it (and them).

I’ll admit that my recommendation is not based on the peer reviewed literature (although this refutation of Monbiot does go over some of that literature). It’s based on a sense of humility. We simply do not have all the answers to the question of how to restore some form of balance and sustainability to the earth. But we do know that people have been living in balance with the earth for 250,000 years and our pre-human ancestors were doing so for millions of years before that. Let’s learn from that history.

We also know that not every culture and not every person has equal responsibility for the problems we face. Colonialism, capitalism, patriarchy and Christianity have a lot to answer for.

I would therefore suggest that Monbiot and his followers talk less and listen more. How can those who were the primary victims of European colonialism - indigenous peoples in a broad sense - be given the chance to put forward their solutions to crises created by Europeans?

In some places this is already happening. In Monbiot’s own Guardian website we can read about North American tribes reintroducing bison both to help populations that suffer from food insecurity and to help restore the ecosystems that European colonists destroyed centuries ago. Many of these projects are too new to be able to say with certainty that they are THE one and only solution. But, unlike the colonial fantasies of George Monbiot, they are a step in the right direction. Dossani previously served on the Campaigns and Policy teams at Oxfam UK and ActionAid International. Check out his YouTube channel.