Lorato Trok and The Politics and Economics of Language
By Wayne A. Young
November 7 – November 20, 2019 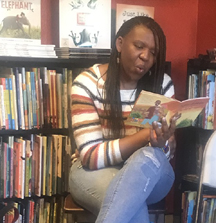 South African writer Lorato Trok writes mostly children's book in her first-tongue, Setswana. However, she explains why here latest release is in English.

South Africa has 11 official languages and 80 percent of the people identify with and/or speak at home one of the local languages, not English or Afrikaans, says South Africa writer Lorato Trok. Yet, much of the country’s official communications are in English. “We have given English too much power,” she concluded.

Trok’s first language is Setswana, which is also spoken by the vast majority of the people in neighboring Botswana. Yet, while the African language is Botswana’s national language, English is its official language, she continued during a talk at the South African Embassy.  Howard University’s Center for African Studies, which sponsors the annual Read Africa Week, cosponsored the hour-long event.

One result of the continued Europeanization of communication tools is that not much pleasure reading materials are in African languages.  Yet, despite the economic disincentive, most of Trok’s writings are for children and in Setswana.

"It's so important for children to read in their own languages, as the stories originated. Stories carry more than words. They carry culture, voices, and backgrounds, but most of all stories written in home languages are told by voices of people who look like them. These should be the first books a child should have, just as their home language is the first thing they hear when they enter this world,” she explained via messenger from South Africa.

Trok grew up loving to read in the Northern Cape, near South Africa’s border with Botswana.  However, the culture of reading is not the same as it in the United States. “The first time I went to the library, I was 18-years-old,” she added.

Trok did break tradition with her latest book, “Against All Odds – The Story of Rosina Sedibane Modiba.”  It is in English. Trok told Port Of Harlem that Modiba was a pioneering Black female athlete because she competed in multi-racial championships when apartheid made it illegal to compete against Whites in 1976.

“I wrote this book in English not because I didn't want to write it in Setswana, but because I had an option and a choice to write it in English,” she explained. “Being multilingual is a gift that widens your options. The book will be translated into other South African languages,” she affirmed.