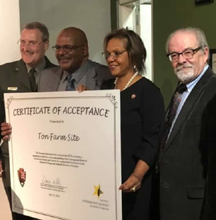 The National Park Service (NPS) recently accepted the Jan and Aagje Ton Farm site into the National Underground Railroad Network to Freedom registry. The site is roughly at 134th Street and St. Lawrence Avenue in Chicago. The farm is in the heart of the bi-state Calumet region, 20 minutes south of what will become the Obama Presidential Library in Chicago and 20 minutes west from the planned Hard Rock Café Casino in Gary, Indiana.

The NPS has found that the location “makes a significant contribution to the understanding of the Underground Railroad in American history and that it meets the requirements for inclusion as a site.”

The farm originally contained 40 acres along the north bank of the Little Calumet River during the period of the 1840’s until the Civil War, generations before the Calumet region experienced the great migration of Blacks from the South to Chicago and Gary. The NPS acceptance announcement celebration took place at the nearby historic Pullman National Monument Visitor Center.

Today, a portion of the farm’s original 40 acres is part of Chicago’s Finest Marina, owned by Ronald Gaines. Much of the rest of the acreage is abandoned property that activist hope the local government will acquire and add to the adjoining Cook County Forest Preserves.

Professor Larry McClellan provided the research and documentation to the NPS that led the federal agency to declare that Ton Farm was an important “station” on the Underground Railroad and had been a “safe house” for countless numbers of Freedom Seekers and fugitive slaves seeking independence during their perilous journeys to Canada and other safe places in northern states. McClellan is the foremost authority on the Underground Railroad in northern Illinois.

The retired Governors State University professor completed the research on behalf of Chicago’s Finest Marina owner Gaines as well as the Little Calumet River Underground Railroad Project. The Ton Farm is the third documented site in South Chicago to gain such recognition, joining two other sites the NPS selected earlier for the national registry:  the Crete Congregational Church and Cemetery in Crete, Illinois and the I & M Canal Headquarters in Lockport, Illinois. The farm is in the heart of the bi-state Calumet region, 20 minutes south of what will become the Obama Presidential Library in Chicago and 20 minutes west from the planned Hard Rock Café Casino in Gary, Indiana. Researchers have also memorialized the site’s Underground Railroad conductors, farmers Jan and Aagj Ton, who were Dutch immigrants.Eagle Scout LeRone Branch, a descendent of enslaved Africans, spearheaded a campaign that resulted in the erection of a monument to them in 2011 at First Reformed Church in South Holland, a church that Jan Ton attended.

The Little Calumet River Underground Railroad Project has been conducting tours and educational events in recent years and endeavors to see a monument dedicated to Freedom Seekers and local abolitionists who risked everything to assist escaped enslaved Americans who traveled throughout Chicagoland and Northwest Indiana.