The Valongo Wharf Archeological Site was inscribed on the UNESCO World Heritage list in 2017, by virtue of it being the only material vestige of the landing of about one million enslaved Africans in the Americas. 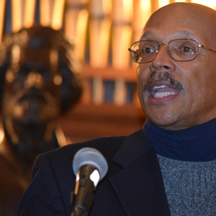 As the International African American Museum schedules to open in January 2023, on the former site of Gadsden Wharf in Charleston, CR Gibbs draws a historical line from that slave port to the slave port at Valongo Wharf in Rio de Janeiro.

The original stone Valongo Wharf stands in central Rio de Janeiro, Brazil and was built in 1811 for the landing of enslaved Africans. An estimated 900,000 Africans arrived in South America at this location (in contrast, an estimated 388,000 Africans arrived in all of North America). The remains of Valongo Wharf are believed to be the most important physical traces of the arrival of African slaves on the American continent.

The distance from Rio to Charleston is 3,937 nautical miles but greed and the telegraph spanned the interval and, in many ways, Brazil was the senior partner in the blood trade. Brazil already had a longer history enslaving its indigenous peoples while the capture, kidnapping, enslavement, and importation of Africans began midway through the 16th century. During the apogee of the Trans-Atlantic Slave Trade, Brazil imported more enslaved Africans than any other country in the world. At least 4.9 million enslaved people from Africa were imported to Brazil between 1501 and 1866.

Rio was already a great slave port long before the Valongo Wharf, but as Maria Gravari-Barbas, Nelson Grabura, and Jean-Francois Stazak observed in "Tourism Fictions, Simulacra, and Virtualities" … as early as 1718, plans were made to transfer the port to a less conspicuous locale further down the bay, so that the sight and smell of the human cargo would not offend elite sensibilities.

For historian Claudio Honorato, it was not the slave trade per se that upset European patricians, but the "repugnant sight" of disheveled, half-naked black bodies, potentially contagious or violent. In 1774, the construction of a new stone dock finally allowed the transfer of port activities to an area known as the Valongo (Val Longo, the long valley), isolated by hills and mangrove, at a safe distance from the city center. The arrival of the Portuguese royal family escaping the Napoleonic wars in 1808 precipitated the slave market's relocation to the Valongo.

"The new purpose built Valongo Wharf would become the focal point of the busiest slave trading complex . . . in the Americas . . . they were fattened, sold, and exchanged in nearby warehouses  . . . while the construction of trading centers and depots dynamized the local economy, the transfer of the slave market to Valongo contributed to the consolidation of the port's function as a repository for disreputable activities in the city," added Maria Gravari-Barbas, Nelson Graburn, and Jean Francois Staszak.

The fetid holds of the ships, the chains and shackles took a staggering toll on the lives of the Africans. Near the wharf, some 40,000 were buried in the Cemetery of the New Blacks, where the bones of the dead were frequently crushed to make room for more corpses. After the rise of the abolitionist in Europe in the 1830s, the trade was transferred to smaller, less visible docks down the bay, where it continued to thrive until Brazil finally abolished slavery in 1888, the last nation to do so.

In 1843, to welcome the future wife of the Brazilian emperor, the Valongo wharf was covered by stone slabs and renamed Empress Wharf. Urban renewal efforts further changed the appearance of the wharf and altered its topography. The area was paved over again and transformed into a public square. The neighborhood, had become over time a teeming center of black Brazilians often called "Little Africa."

Although Blacks had been in Rio since at least 1585, and their population would often exceed that of Whites, their identity and history. like that of Valongo Wharf, was being erased in service of a national mythology that alleges that Brazil is a sun-kissed racial paradise of swaying palm trees.

Note:
The International African American Museum sits on the former site of Gadsden Wharf in downtown Charleston. It is expected to open the weekend of January 21, 2023

Coming:
Part 4 - In Memory and Healing Note:
The Underground Railroad in the DMV with C.R. Gibbs
Tue, Dec 20, 4p