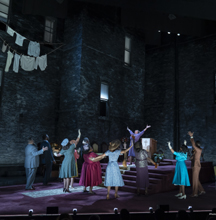 Photo of Antonio Michael Woodard as David and Mia Ellis as Margaret Alexander in The Amen Corner.

The Amen Corner opened magnificently in March 2020; then days later, COVID-19 coldly shut the play and much of America down. Now, Shakespeare Theater is reopening the James Baldwin epic for a limited two week run September 14 – September 26 as it and other theaters across the greater DC area have united to require that their audiences provide proof of vaccination in order to attend all live performances at indoor venues. The requirement is for their audiences, artists, staff, and volunteers.

We first printed this review in the February 27 – March 11, 2020 issue. With such a magnificent stage visual, by scenic designer Daniel Soule, the performance of James Baldwin’s The Amen Corner at The Shakespeare Theater in Washington opened with a very high hurdle to jump, and it did. While each and every performer was outstanding, the dramatic performance by Alabama State University graduate Antonio Michael Woodward as David was unbelievably credible.

The two and one-half hour play centers around David, a young man coming of age and growing up in a holiness church started and run by his mother, Reverend Margaret. I was reminded that many of the characters were shadows of real people as one of the characters supported his “fact” with, “It’s in the Book.” Relating the play to his own experiences, theater goer Donovan Anderson said, “I did know a woman from high school and college like that. She never wore pants because she stated that it is in the Bible that women should not wear pants, no matter how cold it was.”

It was a dramatic, not comedic performance, so the audience’s laughter made me wonder if Baldwin was mocking or exposing the people with whom he grew up. Similar to characters in the play, the playwright was a revivalist minister for the Fireside Pentecostal Assembly during his high school years. His father’s name was David. And, like the character David, Baldwin left his Harlem home and church when he became 18.

Speaking of the play decades after he had written it, Baldwin described his view of religion as a barrier to true social equality. “Faith is, for many people, a kind of hiding place in which you won’t be heard, in which you won’t have to think about yourself and you haven’t got to change, in which you haven’t to be responsible for your neighbor.”  Interestingly, according to the playbill, the original title was “A Hiding Place.”

The Scenic Departments’ technical director, Kelly Dunnavant, said that the grimy, New York apartment look that provided the realistic and spectacular backdrop for Baldwin"s work was constructed using custom-built theatrical flats, covered in sheets of Vacuform that replicated brick. The scenic artists then texturized and painted the brick appearance. The walls tower 32 feet.  Like a human in a grand cathedral, the set made the characters small, but very human.

The Theater also opened the doors of the theater for additional artistic exploration including a showcase in the lobby featuring dolls created by Baldwin’s sister Paula Whaley. Black Memorabilia and Black Doll show fans may recall Whaley showcasing her work at those annual DC events. A great image of Baldwin by performance painter Lionel Daniels also adorns the lobby.