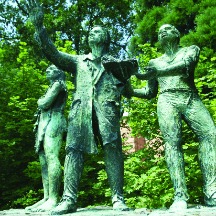 He was the only African American on the Lewis and Clark Expedition. Because of his appearance, size, and strength, York (right) often served as an ambassador or intermediary with the various Native American nations encountered on the way.

In November 2020, Port Of Harlem celebrated 25 years of publication. As we celebrate, we are republishing some of our most popular articles from our print issues. Thanks for subscribing and inviting others to join you in supporting our inclusive, diverse, pan-African publication - - now completely online. We originally published this article in the Feb-Apr 2009 print issue. In May 1955 - the same month that the Supreme Court handed down its final Brown decision to implement school desegregation “with all deliberate speed” - Hollywood released "The Far Horizons-The Story of the Lewis and Clark Expedition." The all-White western starred Fred MacMurray as Captain Meriwether Lewis and the late Charlton Heston as Lieutenant William Clark.

The movie got the background of the expedition correct.  President Jefferson ordered Lewis, his secretary, to explore the Louisiana Territory which Napoleon had sold for three cents an acre in 1803 (of course there was no mention of how Toussaint L’Overture and the Haitian defeat of thousands of French soldiers had made the price so cheap). No actor is credited as playing York, Clark’s slave and manservant. Although he was there in real life, York, in Tinseltown’s version, is missing and forgotten. York was the first Black man in recorded history to cross the American continent north of Mexico, and Americans are finally rediscovering his achievements. Memory of York suffered other slights. Some writers portrayed him as a big, oversexed buffoon or wrongly claimed his name was “Ben,” if they mentioned him at all.

Reliable historical sources tell us that York, his parents and two sisters were enslaved by the Clark family. York was born about 1770 in Caroline County, Virginia. In his will, Williams Clark’s father left York to William and he was William’s boyhood companion.

York had no choice but to accompany Clark as he co-led the Corps of Discovery into the new lands. History, however, provides ample evidence that he fulfilled a variety of important roles on the great journey all the while taking every opportunity to assert his individuality, prove his manhood, and demonstrate his fitness for freedom.

York first appears in Clark’s journal - once travel begins - Tuesday, June 5, 1804:  “which we named Sand C. here my servant York Swam to the Sand bar to gather Greens for our Dinner, and returned with a sufficient quantity wild creases (cresses) or Tung grass[sic].”

Over the three-year, seven-thousand mile adventure, York also served as caregiver to the dying Sgt. Charles Floyd, the expedition’s only fatality. He also cared for Sacajawea (whose image appears on the dollar coin) and other sick members of the group. He carried a musket and hunted game to feed his comrades. Clark mentions that York killed two buffalo in one day. He also scouted several times, often risking his life on dangerous grasslands and prairie.

And because of his appearance, size, and strength, York often served as an ambassador or intermediary with the various Native American nations encountered on the way. On November 23, 1805, when the explorers voted on where the Corps would spend the winter, York voted equally with his colleagues.

In view of his good services during the expedition, York asked Clark for his freedom when they returned. He cited a desire to be reunited with his wife in Kentucky and to chart his own destiny. Clark kept him enslaved. When York grew insolent and sulked, Clark had him beaten. He finally freed him sometime after 1816. Clark set him up in the drayage business and later claimed York died of cholera around 1831. There is, however, a story that York returned to the plains of the far West, but it cannot be confirmed.

York was the first Black man in recorded history to cross the American continent north of Mexico, and Americans are finally rediscovering his achievements. There is a major statue of York on the Riverfront Plaza/Belvedere in Louisville, Kentucky. Other representations of him are being prepared in Minnesota, Missouri, and at Lewis and Clark College in Portland, Oregon.