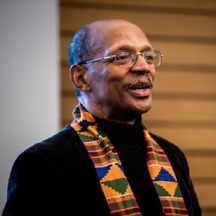 "The cost to African Americans in the nation’s capital we know was disproportionate. Separate but equal never was, as far as the health of city’s Black residents of that day," says historian CR Gibbs.

There was a time not long ago at the end of the First World War, when another killer virus stalked planet Earth. The book World History by AMSCO describes its beginnings:

War-related deaths continued past Armistice Day in the form of an influenza epidemic. Under peacetime circumstances, a virulent disease might devastate a concentrated group of people in a particular region.

However in 1918, millions of soldiers were returning home as the war ended. As they did, they had contact with loved ones and friends, thereby facilitating the spread of the flu. In 1919, the epidemic became a pandemic (a disease prevalent over a large area or the entire world), killing 20 million in Europe, the United States, and elsewhere. India alone may have lost 7 million to the disease.

There were many Americans who believed, however, that if there was one city in one nation that could beat this relentless plague, it was Washington, D.C., the capital of the United States. This is the little known story of the American capital and its response to the first pandemic of the 20th century.

In September 1918, the flu, at first thought to be just a soldiers’ disease, began to strike the District. In Washington, "A History of the Capital, 1800 to 1950," C.M. Green recalled that: by September 21, it had hit the overcrowded capital with a force that broke down the reporting service and swamped doctors with desperately ill and dying patients.

Both Commissioner Gardiner and General Knight were stricken and Board of Commissioners President Brownlow and the new health officer, Dr. Fowler, closed the theaters, the movie houses, the churches, and most of the shops, persuaded the school board to close the schools, and with the cooperation of the Visiting Nurses Association, the Red Cross, and a volunteer motor corps, opened nursing centers in four or five schoolhouses. But the epidemic spread. Physicians and nurses caught the disease. Every hospital bed in the city was  filled. At one point, George Washington Hospital, one of the largest, had every bed occupied and not a single nurse on duty.

With half the trolley motormen on the sick list, street-car service was utterly disrupted. And as the death toll mounted, there were neither coffins nor gravediggers enough to meet the emergency.

The first death in D.C. was John Clore, a White railroad brakeman who died at Sibley Hospital. The Public Health Service opened a temporary hospital at 612 F Street, N.W. The disease even made its way into the White House where President Wilson and several staffers were stricken.

African Americans residents of the city were initially given little thought. A small Jim Crow medical facility was finally set up for them in October at the Armstrong School at First and P Streets, N.W. A tiny contingent of Black nurses was recruited around this time to address the medical needs of returning Black doughboys. Among these women was Aileen Cole Stewart of Seattle, Washington, who had been trained at the Howard University School of Nursing.

The authorities instructed citizens to stay off streetcars and to postpone meetings and public gatherings. Churches were closed. Businesses were placed on staggered hours although playground hours were expanded. There was debate on the wearing of masks, a doctor, H.S. Mustard, did not believe in them, calling them “an absurdity.”

Desperate and dying people were eager to purchase snake oil cures sold by quacks. Local newspapers carried ads for a potion called “Laxative Bromo Quinine,” which came in tablets that claimed to remove the cause of “Colds, Grip, and Influenza” by destroying germs because it acted as a laxative and tonic. African Americans residents of the city were initially given little thought. A small Jim Crow medical facility was finally set up for them in October at the Armstrong School at First and P Streets, N.W. Anyone with any medical background was pulled in to help fight the sickness. Marines from Quantico were brought in to dig graves. Coffins bounds for other cities sitting in the local railyards were commandeered for use in the city.

Deaths declined slightly in November but a surge was reported in December with nearly 350 people dying each day. The online Influenza Archive reports that:  Washington D.C.’s influenza epidemic continued throughout the rest of the year and into early February, 1919 albeit with reduced case numbers. Between October 1, 1918 and February 1919, some 33,719 Washingtonians fell ill with influenza, with 2,895 of them succumbing to the disease. The result was one of the more devastating epidemics in the nation; an excess death rate of 608 per 100,000.

The cost to African Americans in the nation’s capital we know was disproportionate. Separate but equal never was, as far as the health of city’s Black residents of that day.

And many of the same ills that affected them still exist today. Current estimates take the international death toll as high as 50 million with 675,000 deaths in the U.S., more than all the wars of the 20th century. Yet there are few memorials to the pandemic and its terrible cost; in America (a plaque in Colorado, a huge stone bench in Vermont) and not much overseas. The world was eager to forget the suffering and move on.

But not everyone has forgotten, there are a handful of elders, nonagenarians and centenarians, who still vividly recall the loss of family members. One young man remembered losing his sister, Elsie, to the influenza virus in 1920; it was her death that made him, her older brother, Charles choose medicine as his life’s great endeavor. Elsie’s and Charles last name was Drew. Note:  Charles Drew pioneered methods of storing blood plasma for transfusion and organized the first large-scale blood bank in the U.S.