In His Own Words: Martin Robison Delany
excerpted from “Condition, Elevation, Emigration, and Destiny of the Colored People of the United States,"1852 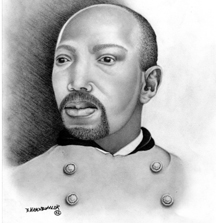 His friend, Frederick Douglass, said of him, “I thank God for making me a man simply, but Delany always thanks him for making him a Black man.”

Note:  In November 2020, Port Of Harlem will celebrate 25 years of publication. As we countdown to our birthday, we will republish some of our most popular articles from our print issues. Thanks for subscribing and inviting others to join you in supporting our inclusive, diverse, pan-African publication - - now completely online. We originally published this article in the Feb 2004 – Apr 2004 print issue. The writer, within the past few years, and as early as seventeen years ago, then being quite young, and flushed with geographical and historical speculations, introduced in a Literary Institution of Young Men, the subject of Mexican, California, and South American emigration. [I] was always hooted at, and various objections raised: one on account of distance, and another that of climate.

[I have] since seen some of the same persons engage themselves to their White American oppressors, officers in the war against Mexico, exposing themselves to the changes of the heat of day and the damp of night, risking the danger of the battlefield, in the capacity of servants. And had the Americans taken Mexico, no people would have flocked there faster than the Colored people from the United States. The same is observed of California.

In conversation, in the city of New York, a few weeks ago, with a Colored lady of intelligence, one of the “first families,” the conversation being the elevation of the Colored people, [I] introduced emigration as a remedy, and Central America as the place. [I was] somewhat surprised, and certainly unprepared to receive the rebuking reply: “Do you suppose that I would go in the woods to live for the sake of freedom? No, indeed! If you wish to do so, go and do it. I am free enough here!,” remarking at the same time, that her husband was in San Francisco, and she was going to him as she learned that the city was quite a large and handsome place.

[I] reminded her that the industry of White men and women, in four years’ time had made San Francisco what it is. That in 1846, before the American emigration, the city contained about seven hundred people, surrounded by a dense wilderness; and that we regretted to contrast her conduct or disposition with that of the lady of Col. Fremont, a daughter of Senator Benton, who tenderly and indulgently raised, in the Spring after his arduous adventure across the mountains, and almost miraculous escape, while the county was yet a wilderness, left her comfortable home in Missouri, and braved the dangers of the ocean, to join her husband and settle in the wilderness. That she was going now to San Francisco, because it was a populous and “fine city” that Mrs. Fremont went, when it was a wilderness, to help to make a populous and fine city.

About two hours previous to the writing of the following fact, two respectable Colored ladies in conversation, pleasantly disputing about the superiority of the two places, Philadelphia and New York, when one spoke of the uniform cleanliness of the streets of Philadelphia and the dirtiness of those of New York; when the other triumphantly replied, “The reason that our streets are so dirty is that we do more business in one day, than you do in a month.”