Defying the Odds - Bayard Rustin
By Wayne A. Young
May – July 2007
Praising the Past 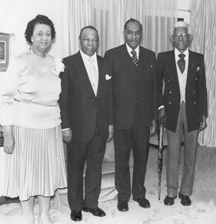 In November 2020, Port Of Harlem will celebrate 25 years of publication. As we count down to our birthday, we will republish some of our most popular articles from our print issues. Thanks for subscribing and inviting others to join you in supporting our inclusive, diverse, pan-African publication - - now completely online. We originally published this article in the May-July 2007 print issue. It was 1941 and Coretta Scott was in the eighth grade when a northern Black man came to Alabama and spoke to Scott’s class about India’s use of nonviolence to free itself from British colonialism. She would hear this man speak again on nonviolence while attending college in Ohio. According to Jervis Anderson, in “Bayard Rustin: Trouble I’ve Seen,”  when this man came to Montgomery to advise Martin Luther King, Jr. on using the tactic during the Montgomery bus boycott Coretta Scott King (then married to Martin) greeted him at the door by saying, “I know you, Mr. Rustin.”

Between the first Chicago student sit-ins in 1942 and the passage of the Civil Rights and Voting Rights Acts in 1964 and 1965, Bayard Rustin had a hand in nearly every major nonviolent civil rights activity in the United States. His grandmother was the first to set in motion his passion for achieving justice non-violently. His family members were Quakers. It is a Quaker tradition to do no violence to others and to respect all people.

He lived with “unrespectable” baggage in a world that often oppresses people who carry such. His mother, young and not married when he was born, allowed his grandparents to raise him as if his mother was his sister. He was left handed during a period when teachers compelled left-handed students to write with their right hand. Rustin, a talented musician, singer, and athlete supported New York Governor Al Smith, a Catholic, in his failed run for the Democratic presidential nomination. During the race he learned that Protestants were prejudiced against Smith’s religion.

Rustin was high school valedictorian and attended Wilberforce University where he experienced his first same-sex relationship. “We never had any physical relationship, but a very intense, friendly relationship. At that point, I knew exactly what was going on,” he said. He was asked to leave Wilberforce after he organized a student strike for better food. He never finished college and while living in Harlem he joined the Communist Party.

Eventually he began to work with A. Phillip Randolph, one of America’s leading organizers, and several civil rights organizations. As a Quaker he could have legally avoided World War II, but instead spent about two and one half years in jail for refusing to register for the draft. In Ghana, he helped the country’s future president and ardent Pan-Africanist Kwame Nkrumah organize the youth division of his political party. He was in Pasadena, California organizing a series of marches when police arrested and subsequently jailed him for 30 days for “sex perversion” in 1953.