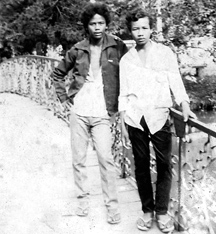 "Surviving Twice" is the story of five Vietnamese Amerasians born during the Vietnam War to American soldiers and Vietnamese mothers.

In November 2020, Port Of Harlem will celebrate 25 years of publication. As we count down to our birthday, we will republish some of our most popular articles from our print issues. Thanks for subscribing and inviting others to join you in supporting our inclusive, diverse, pan-African publication - - now completely online. We originally published this article in the Nov 2006 – Jan 2007 print issue. Louis’ photo was on the cover of the October 2000 issue of Nang Mai, Little Saigon’s major Vietnamese-language magazine. The article said: “Despite having people talk behind his back and look on him as a Black Amerasian, with all the bad stereotypes such as wild, violent, careless of the future, and careless in relationships, Luu Quoc Viet tries his best to quietly step over the wall of that opinion. He is obedient with his mom, sincere with his friends, respectful of elders, and has a great way of getting along with other people.”

I ask Louis how he ever managed to graduate from college despite overwhelming obstacles. He tells me:  “Sometimes I myself wonder, ‘How did I get through some of the terrible times in my life?’ Even now when I think of those five years of college I don’t know how I got through it. No one can believe I did it, even myself. Actually, my former girlfriend is the one who helped me. She studied biology and chemistry and I studied business, totally different fields, but she would help correct my writing. Because of her I would go to class even when I was very tired; I wanted to make her happy.”

“Also, I had a rule for myself—that no matter what, I had to push myself to go to school and study. My rule is to not ‘do stupid things.’ Like when I was a kid, I wouldn’t play with kids who said stupid words. Other singers can go every week to sing, to tour, and build fame, but I often must say, ‘I am sorry, I cannot go because I have to study.’  Do you know how that hurts me? I feel so bad, of course! Because music helps me; when I am sad and go on the stage, I forget everything. Now I am studying to become a financial adviser. I have my business degree and my real estate license, and I am studying about mutual funds and bonds.” On a brochure advertising his real estate work, Louis calls himself the “Singing Realtor.”

Louis believes things are better now in Vietnam for Amerasians, if not perfect. “Growing up some people wouldn’t let me play with their children,” he says. “Many things bothered me a lot then, but now I don’t care anymore. A lot of people were mean to me, and it hurt me, it hurt my stomach. I have been hurt too much already, but now when I go back to Vietnam, I’m not Amerasian now. I am an American! I have money! People want to talk with me nice now. And also now I have God in my life, and when you have God in your life you don’t feel bad anymore.”

When he dreamed of coming to the United States so many years ago, he thought there would be a car, a house, and he would find his father. Louis seldom mentions his American father now. “Of course I feel a little sorry for myself because I didn’t meet my Dad. But he is still alive in my heart. And in 1997 when my Mom and I became U.S. citizens, and I took my new American name, I used my Dad’s name as my middle one. I will someday go to my Dad’s grave, maybe bring him a flower. I am not sure, but someday I even might write a letter to my half-sister. Or maybe someday just go to her house . . . up to her door.’’